Science (they are so funny) 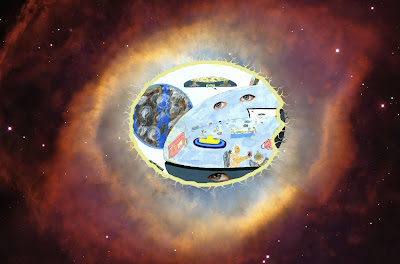 I have been reading about quantum mechanic's lately and find the black and white stupidity (I would say blindness, but too simple) of these great men of understanding, nearly beyond my conception of mortals.
They talk of atoms behaving in a way that resembles the spirit world and how when we mortals try to observe them, they as if on a level of supernatural guidance seem to ignore or better put predestined or programed to behave like simple matter molecules, flick them and they roll.
BUT, (love that word) in reality they the building blocks of the physical universe (atoms) work on a level of a type of collective type of intelligence and are in reality each one a type of universe in themselves. each atom is so immensely complex ed that to say they are simple is anything but the truth.

We as mere mortals not yet elevated into the vast realm of the spirit (died), see the molecules and the subatomic materials acting as they do... (normal)... but in reality they do not really act that way, in reality the subatomic level of atoms act like living creatures. They move they have inners and parts they associate and do all things that a cell does for example, but on a collective level. They even do more than that as science has realised, but cant prove, and never will.
The scientists now realise that sub atomic matter is (alive) so to say but more so as it can do stuff that we in this macro.. (big world) cant do and is impossible to do.

Here's an eg. In this macro world no matter can travel faster than the speed of light, if it did it would break the fundamental law of E=Mc2 and the result would be indescribable. I can describe it (the spirit world) anyhow, it doesn't count for the atomic world as the molecule's travel at the speed of light plus all the time.
Take a sip of your coffee: the speed at which you lifted that cup to your mouth was 5kph in the macro world, to a subatomic particle it was billions of kph, way over the speed of light.

Do you understand what the scientists of the quantum world are perplexed about?
Atoms are matter like us. If we travelled at the speed of light, first there would be no time, then who knows it would be really weird as there would be no laws to hold thins together, gravity, electromagnetism, etc would be non existent.

So these smart scientists are coming to the knowledge of the truth that my brother knew 4,000 years ago and yet still cant or wont see the aw sum pulse (sorry father, Ive called you allot of things before but never a pulse, bear with me father) behind it all.
I give up!
Posted by Zerubbabel at Monday, July 21, 2008